Yesterday the U.S. House of Representatives voted to prevent the DEA and the Department of Justice from interfering with state hemp laws,   laws and Farm Bill pilot programs. In fact, they voted on 3 different hemp amendments and all 3 passed with overwhelming bipartisan majorities!

There is a new Senate hemp and CBD bill that was just introduced by Sen. Gardner of Colorado that needs your support. S. 1333 would remove hemp and CBD from the Controlled Substances Act. Please email your Senators today and ask them to support S. 1333.

Make a contribution today and ensure Vote Hemp has the resources necessary to continue the fight for the legalization of hemp.
Once again this year, Dr. Bronner’s Magic Soaps has generously agreed to match every dollar you donate, doubling the impact of your contribution!
We are working hard to educate Congress. Vote Hemp held a well attended Senate briefing last week which featured Adam Watson from the Kentucky Department of Agriculture and Gregg Baumbaugh, CEO of Flexform Technologies, a tier 2 auto parts manufacturer that produces hemp fiber based composites. We also provided an update on state and federal hemp laws and legislation. 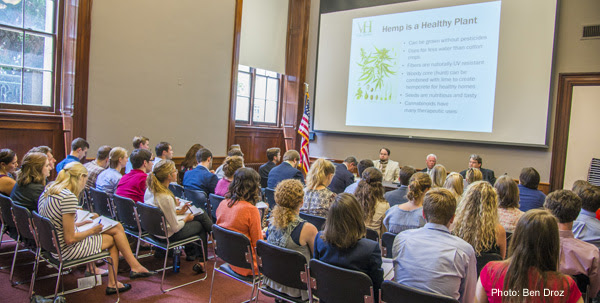